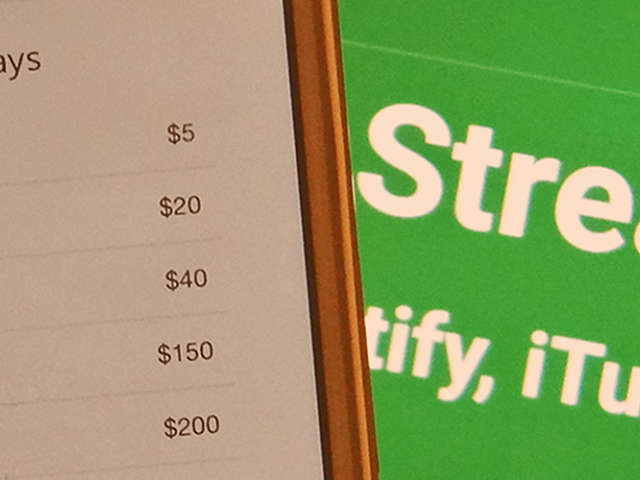 Since the music industry’s transformation towards digital streaming began, I cannot tell you how many musicians have tried to hustle the system, trying to stream their tracks over and over again on various computers at home, and through their social network. I always thought this was a silly scheme to get involved with, so I’m uncertain as to whether it actually worked for them. I’m shocked to discover that this same practice is now being conducted by real businesses on the internet, and streaming companies, such as Spotify, aren’t letting it slide.

Platforms are noticing more and more unusual figures amongst artists sales data, such as a peak of streams from one day, one platform and a conspicuous origin. Often, these tracks are only streamed for 31 seconds (Spotify counts paying streams after 30 seconds). Spotify is fighting against these corrupt practices, removing certain releases and blacklisting artist profiles that appear to be using fraudulent methods. It is important to understand the difference between paying a PR company to connect with independent curators on your behalf (which is lawful business practice) and paying directly for pseudo streams (which is forbidden and considered theft).

The key difference between legitimate promotional services and packages and illegitimate practices, is that legitimate growth will appear to be organic, meaning your tracks are discovered and streamed through exposure such as placement marketing, through playlist makers, public relation agents and music industry gatekeepers, during realistic time frames, and from credible countries of origin. Getting clicks past the 30 second stream mark alone is not beneficial to the artist in the long run, as it isn’t based on any real listeners – you are not building a fanbase to support the perceived growth. Besides the fact you run the risk of getting blacklisted, there is also the sad truth that no one ever actually listened to your music.

How Can You Tell Which Services Are Legitimate?

It can be difficult to tell the difference between a verifiable plugging company and a so called ‘click farm‘ if you are simply infatuated with getting a larger quantity of plays. Both will be advertising themselves in similar ways, with related guarantees and assurances of more plays and popularity growth on their websites in order to get your business. You need to be mindful of the subtleties of these advertisements and services, as well as the prices and campaign packages that they offer. As we are becoming increasingly aware of the risks in this digital age, not every service on the web will turn out to be what it appears to be. If it seems fishy, it probably is fishy.

Even just by noticing the graphics used on a website will be a sign as to whether or not a company is legitimate. For instance on the Streamify website’s landing page is a pretty cool photo of ‘Dale C.’ ‘Classic Rock Artist’ with his electric guitar who claims that by using Streamify his popularity went up by 400 percent and beneath the photo is a button that states ‘Learn More’, so I clicked on ‘Learn More’ and it took me to a photo of ‘J.D. Solo Blues Performer’ also with his guitar and a list of Spotify statistics which were to represent some kind of immense growth in popularity. After much searching, I could not find Dale C. or J.D. anywhere else on the internet (for instance in press releases, interviews, or concert announcements)… despite their rapid growth in popularity.

The company Streamify advertises Millions of Plays per day and in the same paragraph guarantees to deliver 100,000 plays per day through their network of partners – I am guessing at around 3 to 4 Euro per 1000 plays. That may sound nice to get 100,000 plays per day, but also in the same paragraph they write ‘People who will play the tracks are totally random. Plays cannot be targeted to specific profiles, demographics or locations.’ Obviously this is fishy business because any legitimate promotional company would not tell their customers that they don’t use targeted profiles, demographics and locations.

If you are going to use a bona fide promotion company, they would have a genuine network where it is unlikely they can guarantee an authentic 100,000 plays per day. But the difference is, they will use a system that targets the appropriate genre of potential listeners in an applicable location, for a specific campaign, which therefore may increase your plays drastically (and organically) over the entirety of the campaign.

One for All, All for One?

Furthermore, when it comes to the slicing of the monetary pie, your actions have a detrimental effect on the whole community of musicians who offer their music on Spotify. When you buy fake streams from a phony promoter, you are actually stealing royalties from other artists who have played by the rules and generated organic streams.

To distribute the royalties between artists, Spotify takes the global amount of revenue coming in from the monthly subscription, divides by the total number of streams and multiplies by each artist’s streams. Therefore, increasing the number of fake streams will decrease the revenue share of other artists. And as a side note, it is probably not a good idea to distribute albums only composed of tracks of less than 1 minute, unless it is actually, truly a very short composition, because it may also appear to be a scam.

You will find all kinds of music promotion companies on the internet but what really matters behind what you are going to pay for, is your intention. If you want credible organic growth, then you can (and we highly recommend to) pay for that kind of quality. It may appear to be a slower growth throughout the campaign, but at least it will be true.

I have always been a practitioner of DIY and practical promotion strategies, which means not just shooting into the dark to get popular, but rather taking the time to cultivate true fans and devoted listeners – then occasionally using promotion companies in a carefully targeted way that is directed towards a specific demographic, location and outcome. Over time, the numbers won’t really matter very much it’s the real audience that remembers the music that they truly love; these are the people who follow what you are doing and support you at your shows.